The other day, my sister and I went to the Royal Geographical Society to see the Intelligence Squared debate, questioning the statement “We’ve never had it so good”. 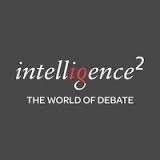 Founded in 2002, Intelligence Squared events get together some of the biggest names in politics, journalism and the arts, to debate the hot topics of the day in front of an audience – in some of the most fantastic venues across London. Previous speakers include: Stephen Fry, President Jimmy Carter, Patti Smith, Richard Dawkins, Chris Anderson, Sean Penn, Germaine Greer, Werner Herzog, Reverend Jesse Jackson, Salman Rushdie, Eric Schmidt, Richard Branson, Professor Brian Cox, Nate Silver, Umberto Eco, Martin Amis and Grayson Perry. So quite a selection of speakers!

The debate we attended was chaired by Jonathan Freedland, who writes for the Guardian, and arguing the case for the motion was Rachel (brother of Boris) Johnson and Jesse Norman MP – with, perhaps predictably, the argument against coming from Will Self and Rod Liddle.

Before we went in, we were all asked to submit a vote on whether we were for or against the motion – both my sister and I said we were for – and then we settled in to be persuaded.  The debate started with Jesse Norman – who, I am sorry to say, gave a pretty much standard Politician Speech. It was well written, informative and funny. But nothing special. In stark contrast was Will Self, the very definition of lugubrious. And hysterical. And sometimes using such long words I didn’t have a clue what he was on about – but knew it was probably perfectly sensible. And none of it written in advance. I wish I had just half of his wit.

Rachel Johnson, up next, was a complete disappointment. Rambling, and, I’m sorry to say, very dull – not what I expected from the former editor of The Lady. She did give an excuse for this – apologising that she’s not at her best because she’s spent the last week living on a pound a day to raise awareness of food poverty. So I’ll give her some leeway! Finally, the debate finished off with a contribution from Rod Liddle – again, witty and entertaining. To be honest, as soon as Will and Rod came on stage louchely and grumpily chewing their nicotine gum, I think the jig was up for the “For” side. 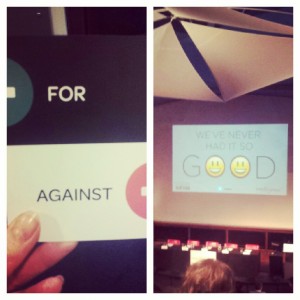 Before questions, the votes from before the debate were announced – 47% of the audience were “For”, 24% “Against”and 29% were “Don’t Know”. We then voted again with the cards they’d provided as we went in, and were given the results after questions and summing up. I’ll not spoil the results for you – you can listen to the whole debate by downloading the podcast from intelligencesquared.com – and they have archives of previous debates for you to try out too.

It was a really interesting and fun evening, and I’d definitely try another one. Future debates include “The English Language is Going To the Dogs” and they’ve started a series of “literary combat events”, starting with Austen vs Bronte which have actors such as Dominic West acting out passages from the books. If you fancy trying something a little bit different in 2014, check it out!

Today’s quote is from Desmond Tutu.

In Hong Kong, you’re never too far from a skyscraper.

Our trip to Hong Kong feels like decades ago now – now that work has taken over again, and we’re slowly getting back to the usual routine (although that will soon go to pot as we’re hoping to add a kitten to the family any day now!), but I wanted to share some photos from my trip.

These photos are from a visit I made to see the site of Kowloon Walled City, now taking up part of a beautiful and peaceful city park in Kowloon. 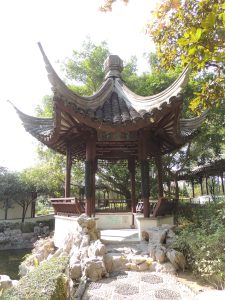 When my boyfriend first told me about the Walled City, I thought he was making fun of me, as it just sounded like a complete fabrication – something invented for the movies, a movie that most likely stars Jean Claude Van Damme. (In fact I wasn’t far off the mark, as in the JCVD classic Bloodsport, the Walled City makes the perfect setting for a martial arts tournament.)

Kowloon Walled City was originally a Chinese military fort, and when the New Territories   were leased to Britain for 99 years in 1898, the agreement excluded the Walled City. At the time, it had a population of around 700 people, but this increased massively during World War 2, when Japanese forces occupied Hong Kong. After Japan’s surrender, China announced its intent to reclaim its rights to the Walled City, resulting in a large influx of refugees looking to take advantage of Chinese protection. By 1947 there were 2,000 squatters in the City. Permanent buildings soon followed, and by 1971 there were around 10,000 people occupying just over 2,000 dwellings in the city.

This cannon harks back to the original purpose of the Walled City, as a fort.

On several occasions, the British government tried to clear the city – but each time the residents managed to stave it off, threatening to create a diplomatic incident – reasoning that the city was part of China, not Hong Kong. From 1948, the British adopted a largely “hands-off” policy, and with no government enforcement from the Chinese or the British save for a few raids by the Hong Kong Police, the Walled City became a haven for crime and drugs – largely ruled by the organised crime syndicates known as Triads. Opium dens, heroin stands, brothels and dog restaurants all multiplied in the ’50s and ’60s, with police usually turning a blind eye. In Cantonese, it was known as the City of Darkness. The city became a hotbed of criminal activity.

Full disclosure – I didn’t travel back in time to take this photo, or the one below – it’s just a photo of a photo in the exhibition in the park, showing how the site used to look. 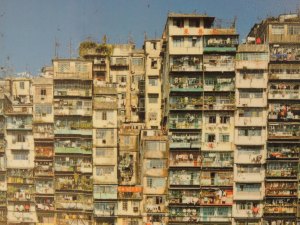 Hong Kong flats – not known for their generous floorspace.

The park is a beautiful place to visit, and tucked away next to the larger Carpenter Road Park (I almost walked right past it, even though I knew I was in the right place!). There’s a great exhibition in the park showing pictures and video of how it used to be, well worth a visit. The original Yamen (office and residence of government officials) is still there, fully restored, as well as some models and graphics of the city. But even for just a peaceful escape from the city, this park is a must-see if you’re in Hong Kong for any length of time. 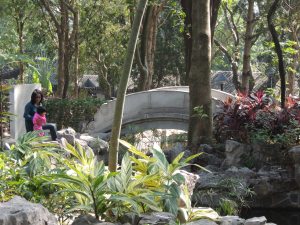 It really is a fascinating place to read about, and despite its obvious dark side, Hong Kong residents do seem to talk about it with some affection – read this South China Morning Post article, written on the 20th anniversary of the City’s demolition for more information. That article includes this fantastic graphic showing a typical building in the city:

For some more pictures showing what life was like in the Walled City in its hey day, I recommend checking out Greg Giraud’s pictures, who spent five years meeting and photographing its residents. A couple of my favourites are below:

Today’s quote is from Ida Shum, a former resident of the Walled City, and taken from this SCMP article.

This cartoon from VectorBelly really made me laugh. I’m really not into the sportsing. Today’s quote is from Mae West.

Well, happy new year guys. Just a few days late, but who’s counting… To be honest, since we got back from Hong Kong a week ago, I have been in total denial about the fact that the year has started and real life is inevitably back on the agenda. But denial only gets you so far in life, and at some point you have to accept that someone is paying you to get up in the morning and sit at your desk – and work isn’t just something you do to pass the time.

But to ease the transition from lady of leisure to worker bee, I’ve decided to sign up to the 100 happy days project. To take part in this challenge, all you have to do is take a photo of something that makes you happy, and submit it to the project via Instagram, Facebook or Twitter (or by email, if you don’t want to make your photos public), accompanied with the hashtag #100happydays

I thought this would be a great way to get me back into the swing of things, as well as cheering myself with thoughts of happy things to keep me going during these dark and dreary January nights! You can follow my posts on Instagram – I’m kirbythekirbs – and join in yourself by registering on the 100 happy days project website. 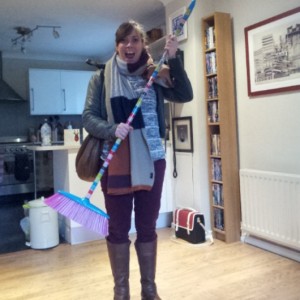 I hope that other things in the next 100 days make me as happy as this rainbow bright broom made me.

Today’s quote is from Oprah Winfrey. Good for you!

There was an error retrieving images from Instagram. An attempt will be remade in a few minutes.